Strong and flavorful Vietnamese coffee makes renovates as fast as it raises pulses. Coffee might have brought to Vietnam by French colonists, but a morning cup of “ca phe” became a local habit eventually. With many variations that use egg, yoghurt, and even tropical fruit, Vietnamese coffee has formed its own unique style.

The preparation method and the blend of different beans give Vietnamese coffee its distinct style. Coarsely ground coffee beans are added into a French drip filter called a “phin”, which stands on the top of a cup. The beans are weighed down with a thin lid then boiling hot water is poured to the phin, and then the water slowly dribbles through into the cup. Most people drink the resulting the strong dark brew along with sweetened condensed milk, a habit that began as the French couldn’t easily get fresh milk. In northern Vietnam, this mixture is referred to as brown coffee or “ca phe nau”, while in the southerners simply call it milk coffee or “ca phe sua”. Coffee filters through a phin

Vietnam has a lot more to offer in the caffeine department than just coffee with milk. A few more unique variations for you to try would be listed below.

Similar to coffee, yoghurt was originally introduced to Vietnam by the French and has been adopted into native culinary practice. Creamy and rich, it is served with numerous toppings from fermented rice to fresh tropical fruits, and coffee also. This might sound like a weird blend, but the rich yoghurt duos incredibly well with a sprinkle of black coffee – just stir it then sip. Imagine a Vietnamese take on tiramisu, it would be condensed milk whipped with egg yolk into an airy foam meets dark coffee in a rich mixture. Egg coffee first made its appearance in the 1940s, when milk was uncommon and egg yolks was such a convenient substitute. 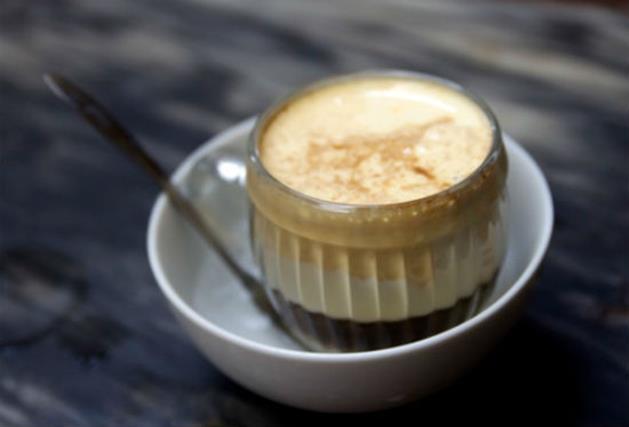 Recently, coffee has even found its way into blends and smoothies. Trendy juice shops elevate creamy blends of fresh fruit with a hint of Vietnamese coffee, occasionally mixing in cashew nuts or yoghurt. When in Hanoi, try a cup of coffee blended with avocado and banana. And if you are visiting Ho Chi Minh City, go for some coffee blended with sapodilla – a custard-like tropical fruit. Both are delightful ways to get your vitamins and caffeine fix at once.

I would love to list a few coffee-drinking tips for your upcoming Vietnam trip:

Milky way: Don’t try to order a decaf. If you prefer mild coffee, order as the Vietnamese and ask for “ca phe bac xiu”, coffee with lots of extra condensed milk.

Sweet spot: As condensed milk is already very sweet, there isn’t any white coffee without sugar. A true coffee connoisseur should go for black coffee with a touch of sugar as it brings out the complex flavors. However, if you want to make sure that your coffee wouldn’t be too sweet, ask for less sugar.

Avoid hunger: Coffee shops in Vietnam don’t typically serve food. Some modern cafés do offer quick snacks, but you should following the local habit of eating first, then dropping by a café to relax. Though, you could always try on some sunflower seeds.

Nowadays, you can find Vietnamese coffee around the world or easily get some online. Trung Nguyen, G7 and Vinacafe are some famous and most consumed.